The Speaking of Dividends column on Page 30 of this weekend’s Barron’s (see here) discussed companies in the S&P 500 that have free cash flow (FCF) yields higher than their dividend yields. I thought I would recreate the table shown with the article, but show the results for all of the utilities in the S&P 500. 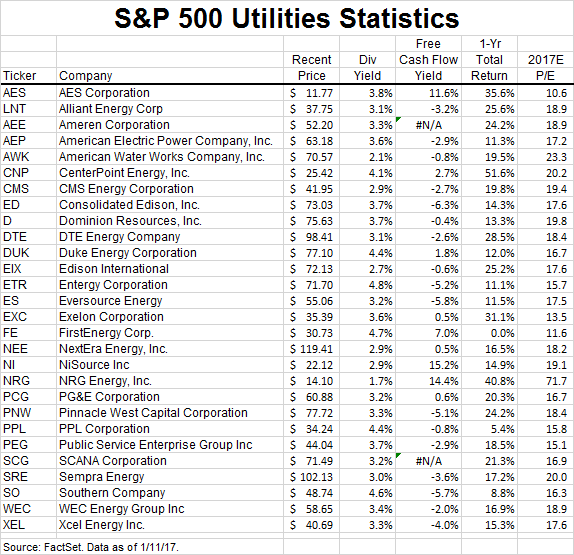 You can see that the majority of the utilities have a negative FCF yield. (This column is based on 2017 estimates) Many of these utilities are going through substantial capital spending projects that require more cash than the company is generating. But, utilities with negative free cash flows are not that uncommon, so you shouldn’t think there is a fundamental problem with the group right now based on these numbers.

The above table also shows some of the dangers of doing large data queries of street estimates. For the utility group the focus for investors tends to be earnings, or EBITDA for the independent power producers (IPPs), so sell-side analysts will make estimates for these numbers for most names. Items like FCF are less consistently covered, and may not be updated as often, resulting in stale numbers that don’t give a true feel for the situation. The larger companies in the S&P 500, which were discussed in this Barron’s article, tend to have greater coverage than the utility group, so the FCF numbers are more consistently relevant to reality.

For example, NiSource is shown in the table above with a 15.2% FCF yield. However, I’ve seen one sell-side report that estimated NiSource’s 2017 operating cash flow at about $1.2B and their capital expenditures at $1.5B. These numbers imply about -$300M of FCF, which is dramatically different than the FCF required to give the FCF yield in the table above.
Another example of what to be careful of is that the definition of FCF may not be consistent among the analysts. NRG is coming through the end of a CAPEX cycle, as shown in this chart: 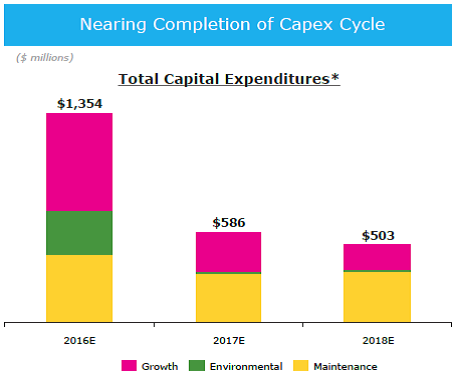 Source: NRG Q3 2016 earnings presentation.
The mid-point of company guidance for 2017 FCF is $800M. Now $800M divided by the current market cap of about $4.6B, gives a 17.4% FCF yield, which seems like it might be consistent with the number in the above table. However, the $800M of guidance is FCF before growth CAPEX. NRG estimates $245M of growth CAPEX in 2017, and when you include that in the equation, the FCF yield drops to 12.1%. So the number in the table above is between these two possible FCF definitions and it makes you wonder if the result has been skewed by analysts choosing different methods.

In any event, NRG does expect to generate significant cash flow this year, but this is an example where the FCF probably won’t lead to a dividend increase. NRG is dealing with too much debt (6.9x EV/EBITDA) right now, and they have committed to using a significant amount of their FCF to bring this debt level down. As an IPP, NRG has a higher risk profile than most of the names in this list. In general one should expect them to pay a lower dividend relative to their cash flow compared to many of the other names shown above.