Bloomberg came out with an article this week saying half of US nuclear plants are losing money. (see here)  This blog has discussed the issue in the past. (See here)  The announced closing of Three Mile Island a few weeks ago is obviously consistent with the new Bloomberg article.

One thing that the article doesn’t really discuss is that it is the high fixed costs that make nuclear power so expensive.  The short run cost of generating power from these nuclear plants is much lower than typical market prices.  The thing is that the margins made on these energy sales are not enough to cover all of the fixed costs.

The Bloomberg article was based on a report from Bloomberg New Energy Finance that says these nuclear plants are losing $2.9B annually.  (Access to the report requires a special subscription)

The New York Times had an article this week discussing closures of nuclear power plants and the potential impact to US climate goals. (See here)

Even though all of these nuclear plants have closed, or will soon be closing, it is interesting to see that the total share of US electricity production from nuclear has not yet fallen much.  Using data from the Nuclear Energy Institute, I created a chart that shows that nuclear’s share of the US generation market has really remained pretty flat since the 1990’s, even though national electricity demand continued to increase. 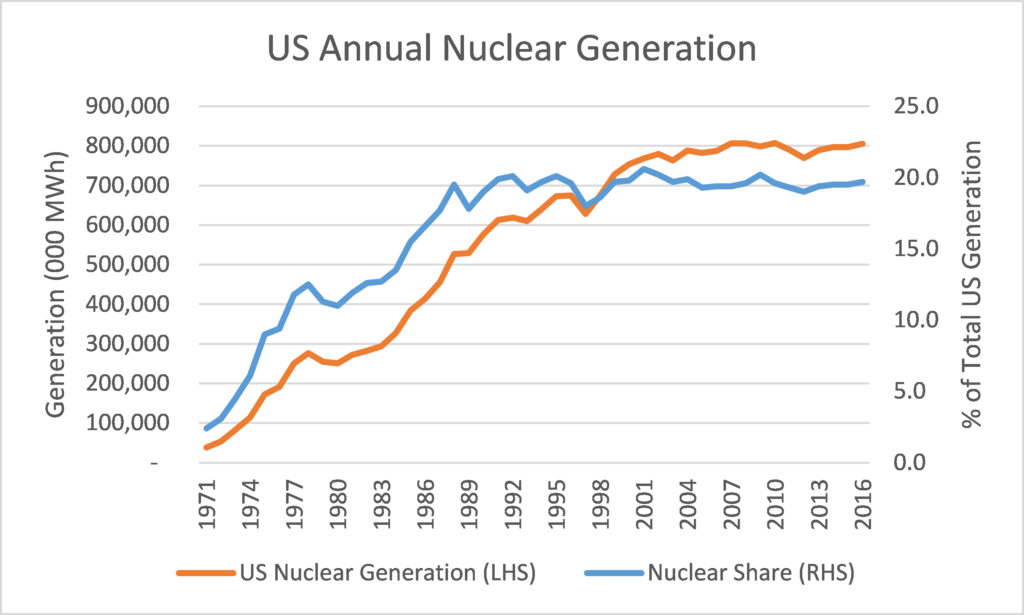 The next chart shows that the amount of US nuclear generation basically flattened out in the 1980’s. 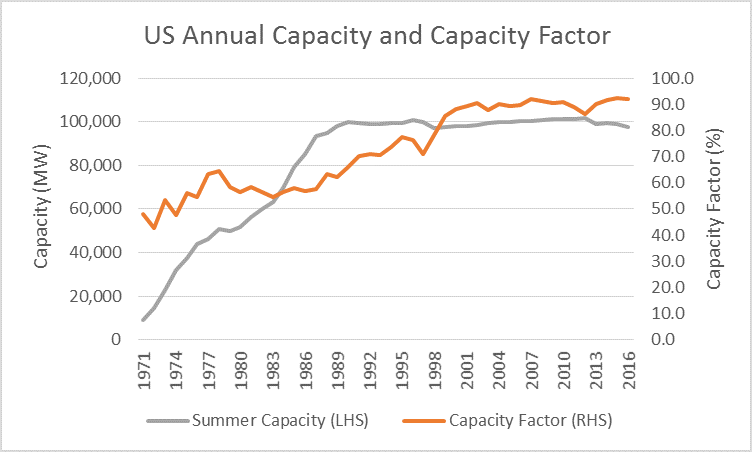 But this second chart also shows that reason nuclear continued to hold onto market share is that the industry was able to keep increasing the capacity factor of its operating units.  There is a noticeable spike up in the late 1990’s.  This was when deregulation started taking place around the country and the operators of these plants had more incentive to operate them more efficiently.  In 2015 the nuclear industry ran at its highest capacity factor ever, 92.2%, and in 2016 it almost equaled the mark at 92.1%.  So even though units have been closing, the industry has managed to keep output relatively constant.

You can only increase efficiency so far, and it seems unlikely that the industry will find many more improvements.  So the latest wave of retirements will probably start having a more noticeable impact on nuclear’s share in the electricity market.