New York regulators have approved the sale of the Fitzpatrick nuclear plant from Entergy to Exelon. (see here)  This is a big step, though the deal still needs approval from the NRC and FERC.  Fitzpatrick is the second smallest nuclear plant in New York, and it produces about 7M MWh of electricity annually.  The following chart compares Fitzpatrick’s historic production with the other nuclear units in the state.

Exelon already owns the Nine Mile Point and Ginna units, while Entergy owns the Indian Point units.  Entergy said they were going to shut the plant down unless they could sell it, because the decline in electricity prices has made the plant unprofitable for them.

Exelon is the logical buyer for the Fitzparick plant.  You can see on the map that Nine Mile Point is essentially right next door, which should create some cost savings opportunities.  The Indian Point plants are farther away from FitzPatrick, which means less opportunity for sharing costs. 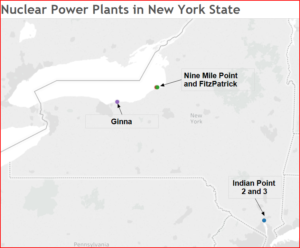 Even though FitzPatrick is small compared to some of the other nuclear plants in New York, about 5.3% of the electricity generated in New York came from that plant in 2015.  So it is still an important plant for New York, and if it closes replacement power would have to come from somewhere and would be more polluting.