Exelon Corp announced this week that it will close the infamous Three Mile Island (TMI) nuclear power plant in 2019 unless it receives government assistance.  (See press release here.  Wall Street Journal article can be found here.)  We have seen this story in the past with other nuclear plants.  Last year Exelon announced it would close its Clinton and Quad Cities nuclear power plants in Illinois.  By December new state legislation was passed to support the plants and they will now stay open.  A similar situation took place in New York, where Exelon said they would acquire Entergy’s Fitzpatrick nuclear power plant only if the state provided subsidies, otherwise the plant would retire.  The subsidies were granted and the plant is still operating.

Now the story is playing out in Pennsylvania.  Exelon has said that without state support the plant will close in 2019.  The plant did not clear in the latest PJM capacity auction, which means that it will not receive extra payments that will help support its large fixed costs.

TMI is one of five nuclear power plants in the state of Pennsylvania.  Exelon also owns the Limerick and Peach Bottom plants, and their Pennsylvania nuclear fleet contains over 5,400MW of capacity.  TMI is by far the smallest of their Pennsylvania plants, with only 800MW of capacity.  FirstEnergy’s 1,834MW Beaver Valley plant and Talen’s 2,520MW Susquehanna plant are the other facilities that would benefit from any new legislation in the state.  FirstEnergy is trying a similar tactic in Ohio where they have two struggling nuclear power plants.

Nuclear power is struggling throughout the country as cheap natural gas is lowering the price of electricity and hurting the profitability of nuclear plants.  These plants still run around the clock because of their low marginal cost.  But, the margins made on these sales are not enough to cover the high fixed costs of these plants.  The Wall Street Journal article linked above mentions three other nuclear plants around the country set to close before 2025:  PCG’s Diablo Canyon in California, and ETR’s Palisades plant in Michigan and Indian Point plant in New York.  Exelon also has their Oyster Creek plant in New Jersey set to retire in 2019.  The chart below shows the annual production from these soon to close plants since 2001, and you can see that even though power prices have declined the plants have maintained their output levels. 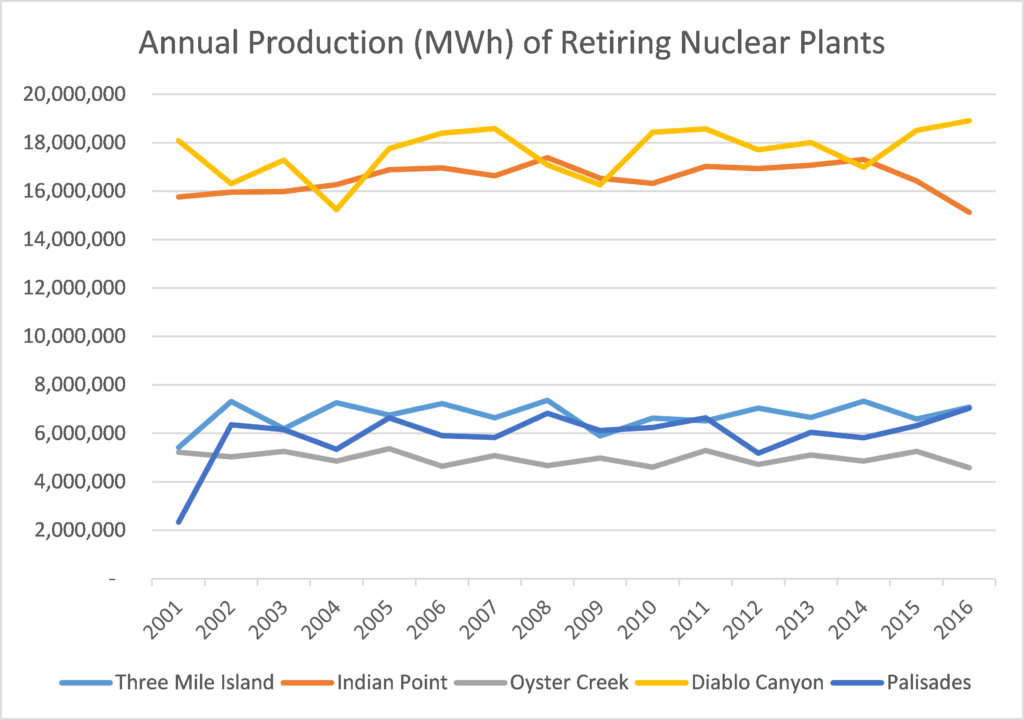