On Monday there was an article on page B1 in the Wall Street Journal discussing California’s plans for increasing its use of renewable energy. (see here)  There were a number of different issues discussed in the article.  California’s goal is to have 50% of it power be generated by renewable resources by 2030.  Here is a chart of the percentage of generation in California from different renewable fuels. 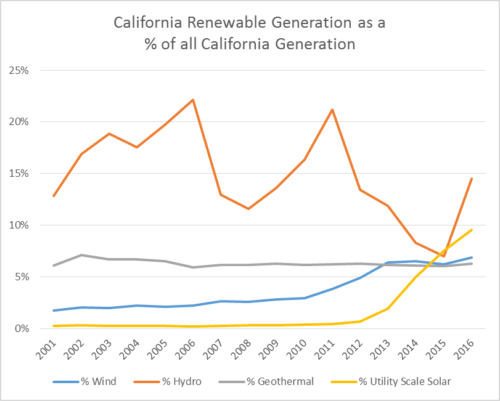 Adding all of these up gives you about 37% of electricity generation in California in 2016 came from renewables.  However, the 50% requirement is based on consumption, and California imports 20-25% of its power, which means this power could come from different sources, so they aren’t as close as the above chart would make you believe, but they are making progress.

One of the other issues discussed in the WSJ article was the impact of all of these renewables are having on the California electric grid.  The state has added so much solar capacity, that on sunny days wholesale power prices are being driven to zero.  Then as the sun starts to set the solar generation starts to drop and there is a big ramp up requirement for traditional generation.  Industry members call this the “duck” issue, because of the shape formed by the daily load cuve.  The article discusses the idea of creating virtual power plants by putting in storage systems that can save the excess power for use at another time.  These systems are expensive and can cost more than double traditional generation.

For more details about the “duck”, there is a really good article on page 57 of the March issue of Power Magazine (see here) that discusses the duck and possible solutions in more depth.  Here is the picture of the duck curve that came with that article:

The chart really helps in visualizing the problem California is facing.  According to this article, it is not individual rooftop solar that is causing the problem, but rather utility scale solar projects.  This is an important point to keep an eye on, because if the duck problems continue to worsen it seems that utility investment in solar would be the first area with reduced investment, not residential solar.  The Power Magazine article also discusses other ways California is trying to deal with this problem besides battery storage.  In particular they discuss increasing the integration of the electric systems in the west.  This would allow more power to flow out of California, spreading the excess generation over a larger area.

Of course all of this discussion on the difficulties caused by renewables brings up the question on whether it is feasible for us to get 100% of our electricity from renewable resources.  This month’s Power Magazine again had a relevant article. (page 54, see here)  The focus was a little bit more on whether the whole world could move to renewables, but it did throw some numbers around about the US as well, including a $13.4 trillion estimated cost to get the US fully powered by renewables in 2050.  There are some big numbers being discussed if the world were to completely move to renewables.  The main study discussed in the article says 52.1 terawatts of renewable capacity would be needed, as well as energy storage capacity and increases in energy efficiency.  The estimated cost of powering the world this way is $125 trillion.  The build out of this much new capacity would require the expansion of some resources as well, which could create difficult bottlenecks beyond the high cost.  For example, neodymium (Nd) is used in wind turbine generator magnets.  Nd production would have to increase 5x in order to get the world only powered by renewables by 2050, or people would have to come up with a new way to make wind turbine generators.

All of these articles are well worth reading for investors in the electricity space.